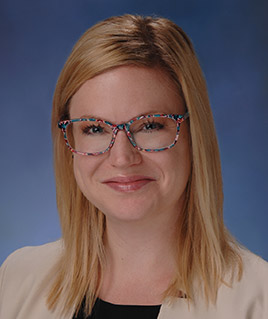 Kimberly is an attorney who truly enjoys helping her clients and their families through what is often a difficult and frightening time.

When you are injured, the thought of bringing a lawsuit can understandably be frightening or overwhelming. Kimberly appreciates that each client has a different comfort level with legal proceedings. She believes it is important for her clients and their loved ones to truly understand what is happening during the course of their lawsuit so they are at ease. Kimberly also finds fulfillment in being a strong support, as well as an advocate for her clients and encourages them to contact her with any issue they may be facing to make sure they are as comfortable as possible throughout the process. Kimberly has been a strong advocate for those wrongfully injured for close to a decade. Prior to and during law school, she worked as a litigation paralegal and law clerk . Since graduating from St. Louis University in 2015, she has continued to prosecute claims nationally in both state and federal courts, including Multi District Litigation. She is an experienced litigator and fights aggressively for her clients to get the compensation they deserve. When she is not working hard, Kimberly spends time with her fiancé, 7 year old daughter, and their miniature dachshund Atticus Finch. She has a soft spot for furry animals, cheesecake, and sunshine on the beach.

Kimberly advocated for clients injured by dangerous drugs and medical devices both during and after law school. She prosecuted thousands of claims to hold pharmaceutical companies responsible for injuring her clients with defective and dangerous drugs. Kimberly brought suit throughout the country in state and federal courts, including Multi District Litigation.

As a new attorney, Kimberly worked for the State of Missouri advocating for the Children's Division and Division of Youth Services. She fought for children in care by working with a dedicated team to form a care plan and to address any and all issues that arose. She fostered reunification when possible, and when it was not, terminated parental rights to provide permanency. She also fought to ensure that when the Children's Division made a finding of abuse or neglect against a person, those individuals remained on the Central Registry.